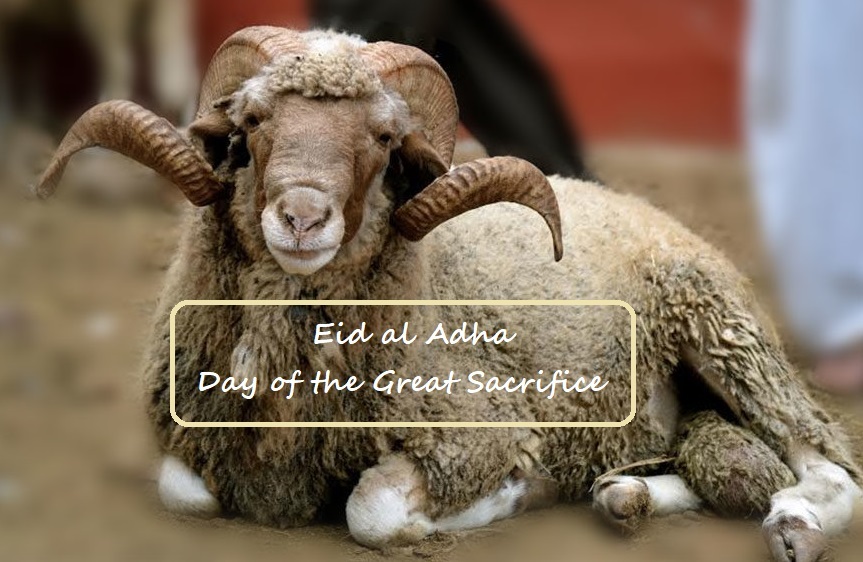 Why do Muslims celebrate Eid al-Adha?

Muslims celebrate Eid al Adha in remembrance of the events of Prophet Abraham (Ibrahim) when he was willing to sacrifice his beloved son Ishmael (Ismail) to obey Allah’s commands which was a symbol of devotion/dedication to his obedience and trust in Allah. Eid al-Adha is a day during the Hajj pilgrimage to Mecca.  Pilgrims that have made the journey for hajj slaughter an animal to honor Abraham’s obedience to Allah, as well as people that do not attend the hajj if they can afford to so it.  Allah tells us:

What is the story behind Eid al-Adha?

It’s a reminder to always follow the commands of Allah and not allow others to tempt us to do something else. Abraham had full trust in Allah and did as he was told, and as he went to sacrifice his son, Allah replaced his son with a ram instead.

Allah the Almighty told us of Abraham's affliction with his beloved son: And Abraham said (after his rescue from the fire):

“”My Lord, grant me [a child] from among the righteous." So We gave him good tidings of a forbearing boy. And when he reached with him [the age of] exertion, he said, "O my son, indeed I have seen in a dream that I [must] sacrifice you, so see what you think." He said, "O my father, do as you are commanded. You will find me, if Allah wills, of the steadfast." And when they had both submitted and he put him down upon his forehead, We called to him, "O Abraham, You have fulfilled the vision." Indeed, We thus reward the doers of good.  Indeed, this was the clear trial.  And We ransomed him with a great sacrifice, And We left for him [favorable mention] among later generations: "Peace upon Abraham." Indeed, We thus reward the doers of good.  Indeed, he was of Our believing servants.” Qur’an 37:99-111

When we obey the commands of Allah, he will give us rewards when we least suspect it and in ways we can’t even imagine. When Abraham obeyed Allah rather than listening to Satan (Iblis), he rewarded him by replacing his son with a ram.

“…whoever fears Allah - He will make for him a way out. And will provide for him from where he does not expect. And whoever relies upon Allah - then He is sufficient for him. Indeed, Allah will accomplish His purpose. Allah has already set for everything a [decreed] extent.” Qur’an 65:2-3

What is the purpose of Eid al-Adha?

Eid al-Adha is a day to remind us to always follow the commands of Allah, regardless how hard a trial we face is, and to put our trust in Him.  Many Christians falsely assume that we sacrifice animals to absolve us of our sins.  However - this is not the case.  Muslims do not believe in the need to shed blood to atone for our sins. Allah tells us:

“Their meat will not reach Allah, nor will their blood, but what reaches Him is piety from you. Thus have We subjected them to you that you may glorify Allah for that [to] which He has guided you; and give good tidings to the doers of good.” Qur’an 22:37

This day is to encourage a Muslim to be more virtuous in their deeds. It is not just about offering sacrifices; rather it is meant to also learn to humble ourselves to our creator and to fulfill our duties to Him, to worship Him, and to gain righteousness by letting go of our own selfish worldly desires.

Eid requires us to meet with family, to show kindness, have compassion and empathy for the poor, while reminding us of the glory and power of Allah and that he is the source of all of our blessings, and to put our trust in Allah.

What happens on the day of Eid al-Adha?

On the day of Eid al-Adha, Muslims will gather for prayer with the community in the morning. Afterwards those that will sacrifice an animal will do so, and distribute it to friends, family, and the poor. Families will gather and spend time together.

Etiquette and Sunnahs of Eid al-Adha

How to pray the Eid al-Adha Prayer

Format of Takbeer on the two Eids

What should be avoided by the one that offers the sacrifice?