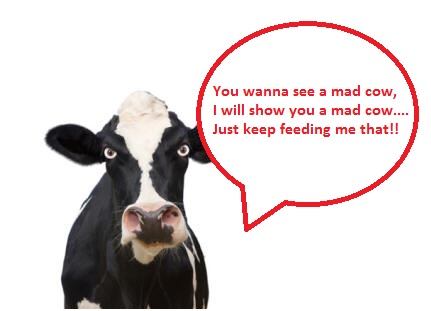 Knowing what's in the carefully selected 'Halal' meat you've been buying for years will not only make your stomach turn- it can literally make you sick- if it doesn't kill you.

In December 2003, the first cow ever to be found in the United States with mad cow disease was discovered. Now, government officials are frantically trying to trace where meat products made from this animal went to across the country.

One major cause of mad cow disease in animals is animal cannibalism- the practice of feeding of animal remains to other animals.

Here's a short list of some of the things cattle and cows are regularly fed in the United States. If you are disgusted with what you learn, decide to do something about it.

Here is what a cow is forced to eat now a days, and it is all legal in the USA:

- All parts of cattle are rendered and fed to pigs and poultry, which are rendered and all parts are fed back to themselves and to cattle. This feeding loop can spread and amplify mad cow disease,

The formula that is fed to calves looks nothing like mother's milk. It's brown and is derived from cattle blood.

- According to a 1999 survey by the U.S. Department of Agriculture, about 99% of the nation's cattle raised in industrial way use hormonal implants to stimulate growth in cattle . European Union has banned these hormones. Recently the US scientists have revealed that hormones leaking into streams fromcattle feedlots are altering the sexual characteristics of wild fish .

- The animal factories are treating cattle (and other animals) regularly with antibiotics which scientists believe is causing antibiotic-resistant bacteria , a key reason for substantial increase infectious diseases in the US.

- Cats and dogs killed in the sanctuaries along with road kills and other dead animals are also rendered and feed to cattle and poultry.

- Slaughterhouse waste from cattle is rendered, or melted down, into "meat and bone meal" which is used in animal feed, to help "animals grow bigger and faster."

- Cows are forced to eat poultry excrements. Poultry litter is the mixture of excrement , spilled feed, dirt, feathers, etc. that gets scooped from the floors of poultry sheds regularly. Because poultry litter can be as much as eight times cheaper than alfalfa, the cattle industry feeds an estimated one million tons of poultry litter to cattle every year. Although excrement from other animals is fed to livestock in the U.S., chicken droppings are considered more nutritious for cows, compared to hog feces or cattle dung.

- The U.S. government continues to allow mad deer infected  with chronic wasting disease to be rendered into animal feed

- Since 1996, the World Health Organization has recommended  that all countries stop feeding any remains of cows to cows, yet the U.S. government still allows dairy farmers to feed calves gallons worth of cow blood and fat collected at the slaughterhouse.

Scientists Prove that Islamic Slaughter of Animals is Better